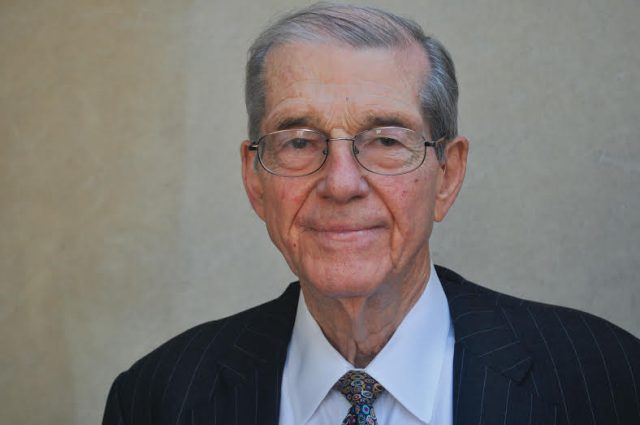 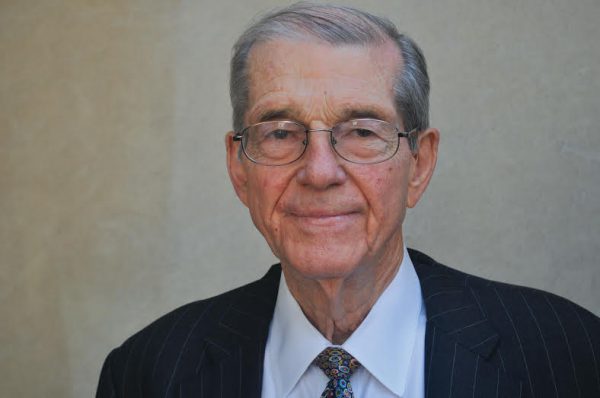 USC political science professor Don Fowler has been involved in state and national politics for nearly half a century and hopes to encourage political civility in a new generation of students.

Imagine it’s the first day of class at the University of South Carolina. You’re sitting in a large lecture hall amid the mild chatter of students when a door opens at the back of the room. An older, tall, slender dark-suited man with wire-framed glasses trots down the side steps towards the front of the room.

He begins the class – Politics and the Mass Media - with announcements, and then proceeds to begin his lecture on the modern American political process in a slow-paced, yet booming southern drawl.

The next day, former Olympic ice skater Michelle Kwan visits the class as a campaign surrogate for presidential nominee Hillary Clinton. A few days later, a member of former Florida Gov. Jeb Bush’s campaign staff addresses the class. As more impressive visitors follow, one student wonders, “How does our professor get all of these people to come here?”

The answer is simple.

Most of Donald Fowler’s students don’t know that their professor is a political legend in South Carolina and on Capitol Hill. For more than 40 years he has garnered respect and admiration from politicians and media personalities alike from both sides of the political aisle.

“I bring in these speakers because they are politicians, experts and advocates who can teach these students about their experiences personally, instead of me just lecturing all class about it,” Fowler said. “It makes the students want to pay attention.”

USC senior political science student Rachael McGahee has had Fowler for several classes over the course of her college career and holds the lessons she has gained from those classes to heart.

“Dr. Fowler’s legacy speaks for itself,” McGahee said. “Having a teacher with such a rich legacy and experience is inspiring. During class he would tell stories about sitting in the White House with Bill Clinton and planning the National Democratic Party Convention in Atlanta. Fowler would invite the most prodigious guest speakers. I had the pleasure to listen to two different U.S. state representatives and many other impressive speakers.”

Henry Ware is a 2010 graduate of USC who says his time in Fowler’s classroom benefitted him greatly in his job as a salesman at Total Quality Logistics.

“I took several classes with Don Fowler that helped me out in a number of different ways: organization, time management, accountability,” Ware said.

Today, Fowler continues using his connections and influence to give his students lessons in politics.

Fowler began teaching American politics at USC in 1964, where he continues as an adjunct professor today. Aside from his duties in the classroom, he has been heavily involved in local and state politics since 1971, serving as the chair of South Carolina Democratic Party until 1980. In 1988, Fowler served as CEO of the Democratic National Convention and then ultimately as chair of the Democratic National Committee in 1995-96, helping to propel former Arkansas Gov. Bill Clinton to two terms in the White House, 1992-2000.

Fowler’s laid-back and friendly personality allowed him to work closely with Republican Party counterparts despite their political differences. His emphasis on personal relationships and civility continue to this day, according to S.C. Republican Party Chairman Matt Moore, who has team-taught a lecture in Fowler’s class with his Democratic counterpart, Jaime Harrison.

“I am always impressed with his kindness and decency - on top of everything else – he’s a good man,” Moore said. “Dr. Fowler is an inspiration when it comes to political civility. I also try to follow that model with my Democratic Party counterparts. Dr. Fowler is definitely old-school, but we need some of that thinking in the new-school.”

Fowler believes that going back to that collegial partisan approach will bring progress in Washington and at more local levels of government.

“Nowadays it’s such a divided atmosphere,” Fowler said. “No one works together, it’s always divide. That’s why they [Congress] have terrible approval ratings and nothing gets done anymore. These students here are the future generation that’s going to have to lead us out of this and they need to learn that working together and compromising is how this country got its start. We need to go back to that.”

In April 2014, a bill was passed in the South Carolina General Assembly to honor Fowler for his distinguished career in public service and to congratulate him on half-a-century of teaching – an accomplishment Fowler says pales in comparison to the potential impact he has on his students.

“If I know I taught one student just one thing they could tuck away and take with them to use down the road in their career, whether it be in politics or medicine or the media – whatever – that’s a bigger honor than anything else,” Fowler said. “Just to have made a small impact on a young life is all the legacy I need.”